Alex Is A Stupid.

Alexis takes on the appearance of a pitch-black robloxian, with hints of purple throughout. She has long dark hair and a black trench coat. Her eyes and sharp horns are a glowing purple. She dons a glowing purple claw in her left hand.

Similar to most killers in Midnight Horrors, Alexis will pursue and chase any players within close proximity of her current position. When Alexis is initially spawned, she will move very slowly. Her speed is equivalent to that of an average walking player. While she's in this state she's very easy to avoid, not only because of her speed, but she also takes 2 hits to kill players (4 if double health), and suffers from an attack cooldown that lasts around a second.

However, she is not to be underestimated. When the timer hits around 71 seconds, Alexis will go into her second phase and start running towards players. Alexis moves incredibly fast in this state, but can be outran with at least the Ultra Coil. However, speed isn't the only thing that changes in this state. Alexis also loses her attack cooldown completely and also starts killing players on contact. 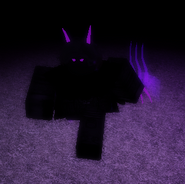 Alexis during her second phase.
Community content is available under CC-BY-SA unless otherwise noted.
Advertisement