Boonie is a Killer in Midnight Horrors. Boonie originates from some silly (yet stupid) GIF presenting a walking Bonnie head fused into his legs with a text above it reading, "DUDE". It was added in Version 1.4. 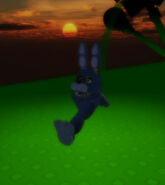 Boonie running in his active state. 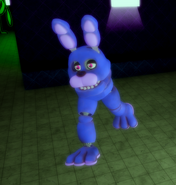 Another image for Boonie.
Community content is available under CC-BY-SA unless otherwise noted.
Advertisement