Foxy is a Killer in Midnight Horrors. He originates from a horror game titled Five Nights At Freddy's, where he serves as one of the main antagonists of the franchise.

Like most killers in Midnight Horrors, Foxy will actively pursue and chase any players close to him. He is relatively fast, allowing him to end chases quickly as he pursue his victims. Players who are caught by Foxy will be killed in around 2 hits (4 if the player has Double Health). Foxy suffers from a short attack cooldown while attacking players, this is one of the only things that slows him down. 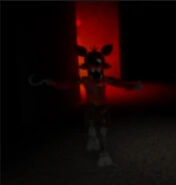 Another image for Foxy
Community content is available under CC-BY-SA unless otherwise noted.
Advertisement