A Nightmare on Elm Street

Retro Horror Villains, Jason, Michael Myers
Freddy Krueger was a Killer in Midnight Horrors. He originates from A Nightmare on Elm Street as the main antagonist in the film franchise.

Like most killers in Midnight Horrors, Freddy Krueger will actively pursue and chase any players close to him. He suffers from an attack cooldown that lasts at least a second and is capable of insta-killing the players in one hit (1-2 hits with Double Health). His movement speed is almost equivalent to the speed granted by a Speed Coil, making it somewhat easier for Freddy Krueger to catch up with his victims.

The old version of Freddy Krueger. 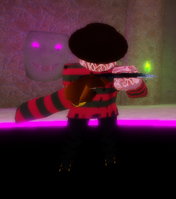 Freddy Krueger's old intro (sharpening his claws briefly before he chases the players).
Community content is available under CC-BY-SA unless otherwise noted.
Advertisement