Joe is a Killer in Midnight Horrors. Joe is an original character (OC), which means that he does not originate from any other game series or franchise.

Joe appears to be a killer which uses a decal as his body. His ‘body’ will always flip horizontally every now and then to represent ‘walking’. His decal body depicts a cartoonish pink-skinned humanoid wearing old clothes. His shirt is brown and his pants is blue. He also wears small black shoes. His hands doesn’t consists of any fingers, appearing to be spherical just like how a cartoonish character would. His head seems to be ‘disconnected’ from his neck, appearing as if there’s a space between them. His head appears to have dead skin. His eyes are bleeding out black substance with a weird looking pupil being visible in one of the eyes. His mouth appears to be drooling out also with black substance.

Like most killers in Midnight Horrors, Joe will actively pursue and chase players, however, will specifically target a player somewhere in the map. Very much like Stoic, he chases one single player until they are dead and then goes to attack another player.

While he moves rather slow (the speed of a normal running player), he can instantly kill the player on contact. Players who are not targeted cannot be killed by Joe, regardless of whether they have made contact with it or not. 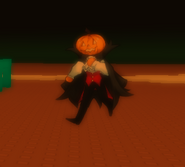 Joe's appearance in Version 1.13.0 and 1.33.0.
Community content is available under CC-BY-SA unless otherwise noted.
Advertisement