Like most killers in Midnight Horrors, John will actively pursue and chase any players close to him. If no players are close by, then John will walk towards the closest player's position until enough distance has been covered, once this happens John will proceed to sprint towards players at a much faster speed. Players who are caught by John will immediately be killed. He does not suffer from any drawbacks or cooldown while performing his attacks, allowing him to kill multiple players at once effortlessly. 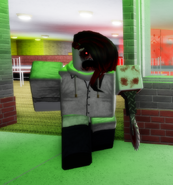 The old version of John.
Community content is available under CC-BY-SA unless otherwise noted.
Advertisement