Classic Zombies, Menacing Zombie, Ultra Obama, Obama, Zombie
Obama Zombie was a Killer in Midnight Horrors added in Version 1.6, also known as the April Fools Update, made as a joke for the update prior to his removal in Version 1.7 after the event ended. His appearance is based on an old model of a typical Roblox zombie, however, its face is implanted with an image of Obama's headshot with a doodled expression.

Like most killers in Midnight Horrors, Obama Zombie would pursue and chase any players on the map. He was rather slow if there were no players nearby to kill, however, would continue to actively pursue and head in the direction of the closest players to him. Once a player was detected, Obama Zombie would sprint towards the players and kill them in 3 hits (6 if the players have Doubled Health). He suffered from an attack cooldown of 1 second before he could attack the player again. 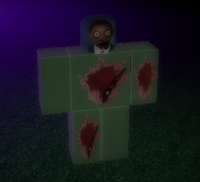 Obama Zombie when no players are alive. 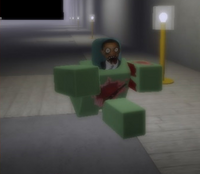