Sans Orb, Chara, Sans Griffin, Thanos x Sans, UltraSans
sans was a Boss in Midnight Horrors. He was added in Version 1.6 (April Fools' 2020), and originated from the game Undertale.

Once a map is reloaded, all players within a server will be taken to a bone-shaped platform in what is seemingly an endless void. The Void Boss will emerge and unveil itself from the darkness and appears to be ready to kill the players, however, this is later revealed to be a fakeout after 5 seconds have passed. sans will reveal himself, standing on top of a bone and will chat with the players. Players will be taken to the Chungment map to further their conversations with sans, as he rambles on. After a bit of dialogue, he will ask the server if Big Chungus is funny.

Players will have two choices to make in this scenario. The server can collectively agree as a group that Big Chungus is funny by saying "Yes" or saying nothing at all to take on a neutral stance, both options leading to sans sparing everyone and will give the "You Aren't Cringe!" badge. Or, players can choose to not cooperate and exclaim "No" in the chat, resulting in sans being irritated and the fight is initiated.

There are two phases while a server is up against sans. The first half of the fight will have players facing various attacks that sans is capable of unleashing on the players. Players will be barraged by bones, incinerated by Gaster Blasters, and be cringed to death by sans while suffering under the 'Cringe' status effect.

If the players managed to survive the first half of the fight, everyone who died in the first half will be able to participate again at the checkpoint. However, the fight will become increasingly difficult as players will need to be prepared for the unique mechanics of the attacks he used in the second phase. sans will refer these attacks as 'special attacks', indicating that they possess a unique property that players should recognize if they're familiar with the Undertale series. Attacks colored in Blue indicates that you must be patient, in other words, to stay idle. By not moving, the player will not suffer from any damage for that specific attack. Attacks colored in Red indicates that you must move through it. Players moving through red attacks will not suffer from any damage, however, if they stand still while they are hit by the red attacks, they will suffer from a bit of damage. This is also held true with the blue attacks if the players performs the opposite of what is expected.

After some red and blue attacks, players are expected to survive a trial where they must reach a floating platform in time before they are killed by the Bonezone, which will periodically flash every 1.5 seconds and kill any players that are not in the platform. Players who are in the platform still need to be wary about the Gaster Blasters that is summoned, as they can still be killed while they're on the platform if they are not caught off-guard. Any players that manage to survive the entirety of the fight will be able to 'fight' sans, with a bombardment of rotating Mercy/Attack text bars scattered across the map while sans is worn out by the fight. Players must identify which of the many text bars on the map is the actual 'Fight' ability, as players who recklessly collect too many of the fake text bars being eradicated by a Gaster Blaster. Once the players find the real one, the text bar will shoot into sans. sans will state that it only feels like 0.5 damage, before being knocked out. Players who successfully defeat sans will be awarded the 'Defeat Void Boss' badge and an event item.

sans has various abilities he can use to kill the players. His move-sets include the following:

The Void Boss fakeout, before the boss fight is revealed to be with sans. 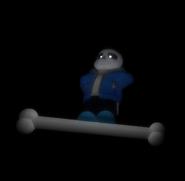 Attack 3 (Large Gaster Blasters being blasted across the map)

Attack 5 (A row of Gaster Blasters; players must position themselves in the gap)

Dialogue prompted that either initiates the fight scenario or takes the players to the next round depending on the choices the server made.

Dialogue given if the server responds with "Yes" or nothing at all.
Community content is available under CC-BY-SA unless otherwise noted.
Advertisement