N/A
Soldier was a Killer in Midnight Horrors. Soldier was added in an unknown version and its theme that played while it gave chase was Unreleased OST - Chase Music 2 from Dead by Daylight.

Like many other killers, Soldier was a killer that would chase and pursue nearby players. Despite carrying a gun, Soldier's hitbox wasn't that big and he would have to be very close in order to do damage. Soldier had an attack cooldown that lasted at least a second and also had an animation that would play before he actually dealt any damage. If no players were nearby, he would start walking slowly to the closest player at his current location (at least attempt to). Soldier, along with all of the other killers before version 1.3, was able to go through walls and teleport. 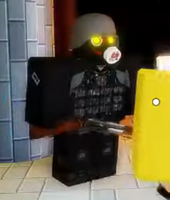 Another mugshot of Soldier.
Community content is available under CC-BY-SA unless otherwise noted.
Advertisement