Third Impact is a Killer in Midnight Horrors. It is a direct reference to the anime Neon Genesis Evangelion, more specifically the movie The End of Evangelion.

Third Impact appears to be two entities. The first being a giant red glowing moon-like object. The second entity is an colossal white humanoid with with beady red eyes and large white antlers resembling ROBLOX user 123jl123. They also bear six wings on their back, three on each side. The upper torso of the entity is all a player can see, but their body extends beyond the map, making it the largest killer by far.

Upon the start of the round, the timer is frozen at 117 seconds and a large red moon will ascend out from the side of the map and cause a map-wide shockwave, the floor will then turn white, and "Third Impact" will appear holding the sun around their hands and grow 6 wings. Both entities remain in this position for the duration of the round. This sequence lasts around 55 seconds.

The timer will then extend to 160 and the attacks will begin to commence. The entity will then send out a myriad of bullet hell-like towards players. There are five different attacks the killer can send out:

An older version of Third Impact in-game. They usually were shrouded in fog due to their immense size, this was shortly fixed. 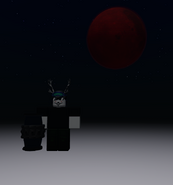 The red moons size in comparison to Joel.
Community content is available under CC-BY-SA unless otherwise noted.
Advertisement