(this Killer is not to be confused with White Finger, another similarly named Killer)

Unlike most killers in Midnight Horrors, White Face does not actively pursue players but instead, choose a random target on the map and phase towards them. Players who are targeted by White Face will receive a flashing text in white font stating, "Make the right choice, for it is irreversible." While the text is flashing on the targeted player's screen, White Face will appear a random distance away from his current target. When he initially appears, White Face is rather slow. During this point, White Face will chase the closest players to him, while also phasing through walls and other objects. After a short while, White Face will speed up and start moving towards his target, killing any players in the way on contact and killing his target on contact as well. When this happens, the targeted player is able to look at him to make him go for someone else without dying. 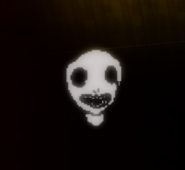 Another image of White Face.
Community content is available under CC-BY-SA unless otherwise noted.
Advertisement